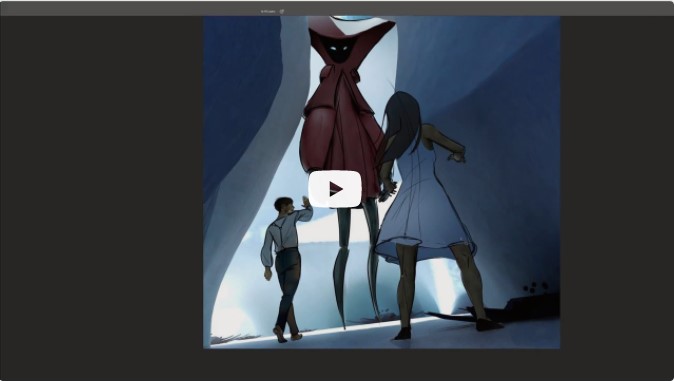 Edit: This post is now public! It’s a little preview of what I do every month – give my Patrons insight into how the final illustration came to be. If you like what you see and want to see this for every month’s illustration, consider becoming a Patron!

I already posted a short timelapse earlier, but this is the full thing from start to finish. 26 minutes of me figuring out the concept of this drawing and going back and forth on composition and colors. A short overview of what I’m doing:

I start out in Blender to create the tunnel described in the story. In 2017 I visited Antelope Canyon, a gorgeous place that I took as inspiration to create this composition. Its shapes are based on pictures I took myself! I don’t only pay attention to the shapes, but also the way the light falls through and hits the stone.

I then start positioning the characters in the frame. By making these renders I can see early on what effect lighting and shapes will have on the whole composition, so I can experiment a lot without having to start from scratch all the time. I need to mess around with the character’s materials a bit since I’ve imported them from Daz3D and they’re not catching the light as I want them to.

I then jump into Quill (VR) to create a character from scratch pretty quickly. It’s kind of like sketching on paper, only I’m able to export this to Blender as well and move the character around. A huge inspiration for the Native were the statues by Philip Jackson.

After that I reimported the 3D sketch into Blender, and after playing around with the figure a bit I decided I wanted it to be much bigger than the humans, just like Time is.

After a bit more fiddling around and creating the stone flowers on the wall, I finally landed on a composition. While 3D can provide a great base, it’s easy to lose the fluidity of the drawing in your work while relying on it too much. So while I use 3D to figure out a composition and use it as a reference, I also try to deviate from it sometimes and put as much flowiness into my work as I can.

When I have the sketched lines down I go in with the lasso and gradient tool, and add the clothing and details I want. I keep using layers I rendered out in 3D as tools to help me select elements quicker. I also use different elements of the 3D render to emphasise parts of the illustration, like the light coming down the tunnel.

Once I’ve got the base down, I merge most layers and start painting over everything with an oil brush, both line art and the render. Again, the base is a good guide but I’m not afraid to paint over things or deviate if I think that’ll help with the composition or mood.

Lastly, I can’t help but add some warmth to the whole thing. Both to refer to the forest fire from the story, and to add some color contrast I was craving.

After all that it’s mostly down to painting in touch ups and details. I spend more time on details around the focal point of the illustration (usually faces and hands) and get a bit rougher with my brush once I get further from the focal point.

I try one last thing: adding a flower for more depth to the foreground. I ultimately decide against it.

After some final level and color adjustments and adding some bloom, the piece is done!