July Insight | Netherrealms was supposed to be a graphic novel 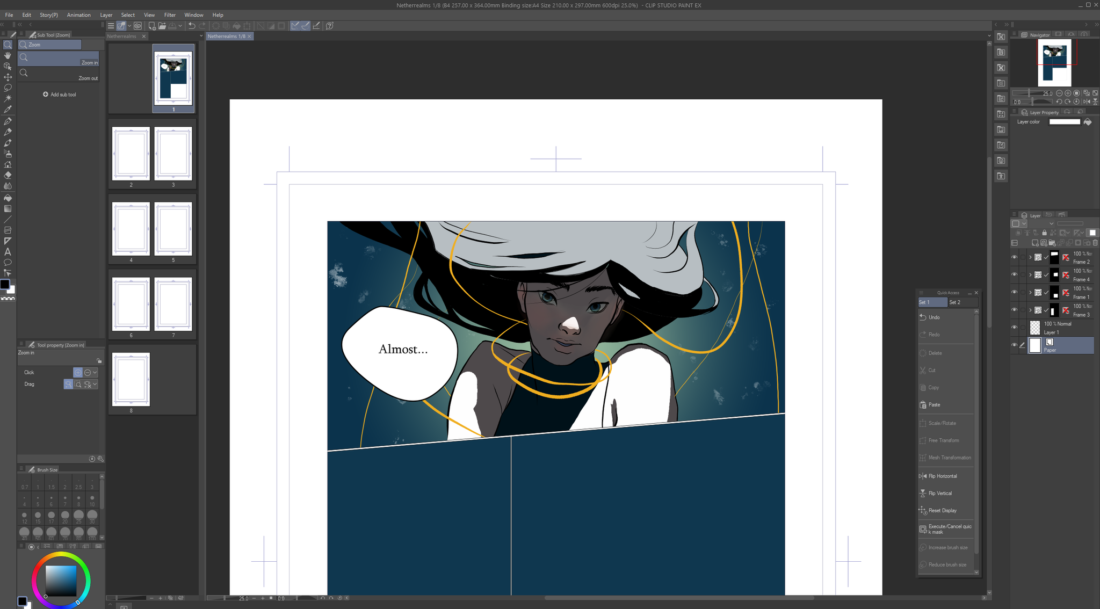 July Insight | Netherrealms was supposed to be a graphic novel

Above is a short test I did in Clip Studio Paint to try the tools for graphic-noveling. What amazing specialized software!

I dove into the archives for this one. Netherrealms was first conceived as a graphic novel instead of a series of illustrations. Why? Because comics and graphic novels have always been the way I told stories, from when I first drew my horse character Roebel when I was around 10 years old.

After that I found new inspirations like Jessica “NeonDragon” Peffer and her comic TimeScapes, and started drawing more comics of my own. Here are some pictures of comic projects I started when I was young, until I went to college: A TimeScapes clone (there’s a pad with lots of pages somewhere), Lost Trace Mission, 3 Dimensions, another Lost Trace Mission (the Reboot with about 100 pages completed). Unfortunately, the mantra “write what you know” hadn’t really stuck yet, so the projects were flimsy and never went anywhere (apart from the fact that I was just having fun).

Ximena, Clovis and Avyola from my first incarnation of Lost Trace Mission

Mezukashii, from my 3Dimensions project

After that, I let go of graphic novels for a while. College classes kept me way too busy to have any side project. It was mostly eat work eat sleep repeat, especially the first couple years.

I can’t seem to keep away from creating stories, though. After I’d finished my graduation project in 2012 or so, I started thinking about another incarnation of my black-haired girl from Lost Trace Mission. This time, she would be close to my age, and I’d be writing about things I had already studied a lot: fantasy realms, dreams and early adulthood. Netherrealms was born.

The first sketches I made for Netherrealms as I was brainstorming.

My friend Chris has been pretty vocal about wanting to see the story in comic pages instead of/in addition to illustrations ever since I told him about the Patreon. I have to admit I’m getting excited about the idea again, so for Augusts’ Netherrealms piece I’ll be creating one or two comic pages to test the workflow and what the comic would look like.

It’s been 9+ years since I drew the first sketch for Netherrealms. Before I start creating the story as a graphic novel, I want to do a couple things differently compared to my previous projects:

I have to say, with Patreon and social media, the landscape is very different from when I first started creating stories. I’m curious to see where this goes!